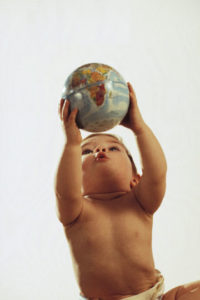 According to the city of Montreal

The average cloth diaper is used between 100 and 150 times as a diaper, and then retired. Retired cloth diapers are in high demand and have a second lifecycle wherever soft, lint-free rags are needed.

Furthermore, washing cloth diapers at home uses 50 to 70 gallons of water every three days – about the same as a toilet-trained child or adult flushing the toilet five to six times a day. Our service puts the diapers through an average of 13 water changes, but because of the economies of scale, uses less water and energy per diaper than one laundry load at home1. The waste water produced from washing our diapers is benign since we use a chlorine neutraliser, while the waste water from the manufacture of the pulp, paper, and plastics used in disposable diapers contains dioxins, solvents, sludge, and heavy metals.